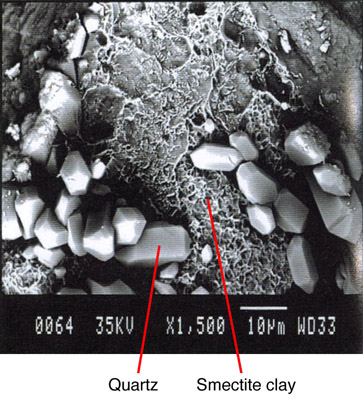 SEM of authigenic quartz and smectite.

A group of rock-forming, hydrous aluminum silicate minerals that are platy in structure and can form by the alteration of silicate minerals like feldspar and amphibole. Common examples include chlorite, illite, kaolinite, montmorillonite and smectite. Some clays, such as montmorillonite, have the tendency to swell when exposed to water, creating a potential drilling hazard when clay-bearing rock formations are exposed to water-base fluids during drilling, possibly reducing the permeability of a good reservoir rock. Some clays are used in drilling fluids to form an impermeable mudcake to isolate a formation from the invasion of drilling fluid. The structural difference among clays (smectite, kaolinite, chlorite, illite) determines the surface area exposed to reservoir fluids or stimulating fluids. Generally, higher surface area indicates higher reactivity. However, not all the clay present in a rock is reactive. Clays can be found in pore spaces, as part of the matrix or as grain-cementing material. Authigenic clays, which grow in the pores from minerals in the connate water, can be pore-filling or pore-lining. These clays have considerable surface area exposed in the pore and can be reactive, while detrital clays that are part of the matrix are usually less reactive. Additionally, clays as cementing, or grain-binding, materials may react with water or acid to disaggregate the formation if they are not protected by quartz overgrowths. The most common clays that create clay problems are kaolinite, smectite, illite and chlorite. These minerals can be treated using hydrofluoric acid [HF]. 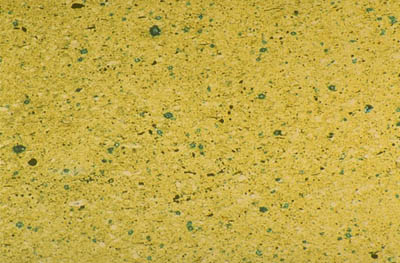 A large family of complex minerals containing the elements magnesium, aluminum, silicon and oxygen (magnesium, aluminum silicates) combined in a sheet-like structure. Clays are mined from surface pits as relatively pure deposits and used for bricks, pottery, foundry molds and in drilling fluids among other uses. Clays, as claystones, shales and intermixed with sands and sandstones make up the largest percentage of minerals drilled while exploring for oil and gas. Sodium bentonite is a useful additive for increasing the density of drilling muds, but other clay types are considered contaminants to be avoided and removed. Individual clay platelets can be viewed only with an electron microscope. Crystal structures are also determined by X-ray diffraction (XRD). The atomic structure of the clay group of layered silicate minerals varies from two-layer to three-layer or four-layer (mixed-layer) structures. One of the structural layers is a plane of silicon dioxide tetrahedra (silicon at the center and oxygen at all four corners of the tetrahedron). The other structural layer is a plane of aluminum hydroxide octahedra (aluminum at the center and hydroxides at all six corners). The tetrahedral and octahedral layers fit one on top of the other, with oxygen atoms being shared as oxide and hydroxide groups.