A break or planar surface in brittle rock across which there is observable displacement. Depending on the relative direction of displacement between the rocks, or fault blocks, on either side of the fault, its movement is described as normal, reverse or strike-slip. According to terminology derived from the mining industry, the fault block above the fault surface is called the hanging wall, while the fault block below the fault is the footwall. Given the geological complexity of some faulted rocks and rocks that have undergone more than one episode of deformation, it can be difficult to distinguish between the various types of faults. Also, areas deformed more than once or that have undergone continual deformation might have fault surfaces that are rotated from their original orientations, so interpretation is not straightforward. In a normal fault, the hanging wall moves down relative to the footwall along the dip of the fault surface, which is steep, from 45o to 90o. A growth fault is a type of normal fault that forms during sedimentation and typically has thicker strata on the downthrown hanging wall than the footwall. A reverse fault forms when the hanging wall moves up relative to the footwall parallel to the dip of the fault surface. A thrust fault, sometimes called an overthrust, is a reverse fault in which the fault plane has a shallow dip, typically much less than 45o. Movement of normal and reverse faults can also be oblique as opposed to purely parallel to the dip direction of the fault plane. The motion along a strike-slip fault, also known as a transcurrent or wrench fault, is parallel to the strike of the fault surface, and the fault blocks move sideways past each other. The fault surfaces of strike-slip faults are usually nearly vertical. A strike-slip fault in which the block across the fault moves to the right is described as a dextral strike-slip fault. If it moves left, the relative motion is described as sinistral. A transform fault is a particular type of strike-slip fault that is a boundary of an oceanic tectonic plate. The actual movement of a transform fault is opposite to its apparent displacement. The presence of a fault can be detected by observing characteristics of rocks such as changes in lithology from one fault block to the next, breaks and offsets between strata or seismic events, and changes in formation pressure in wells that penetrate both sides of a fault. Some fault surfaces contain relatively coarse rubble that can act as a conduit for migrating oil or gas, whereas the surfaces of other faults are smeared with impermeable clays or broken grains that can act as a fault seal. 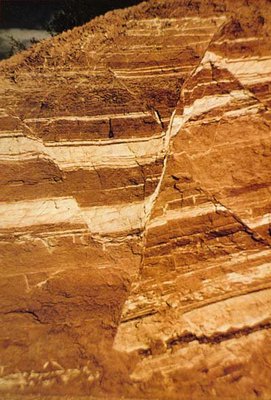 Photograph of displacement by normal faults.