One of the rig crew members who gets his name from the fact that he works on a platform attached to the derrick or mast, typically 85 ft [26 m] above the rig floor, during trips. On small land drilling crews, the derrickman is second in rank to the driller. Larger offshore crews may have an assistant driller between the derrickman and the driller. In a typical trip out of the hole (TOH), the derrickman wears a special safety harness that enables him to lean out from the work platform (called the monkeyboard) to reach the drillpipe in the center of the derrick or mast, throw a line around the pipe and pull it back into its storage location (the fingerboards) until it is time to run the pipe back into the well. In terms of skill, physical exertion and perceived danger, a derrickman has one of the most demanding jobs on the rig crew. Some modern drilling rigs have automated pipe-handling equipment such that the derrickman controls the machinery rather than physically handling the pipe. In an emergency, the derrickman can quickly reach the ground by an escape line often called the Geronimo line. 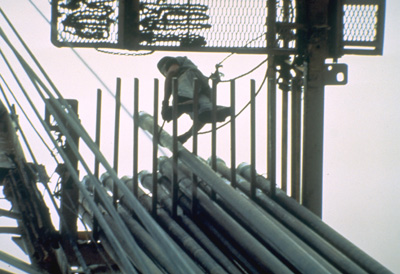 Photograph of derrickman on fingerboards.

The member of the drilling crew in charge of the mud-processing area during periods of circulation. The derrickman also measures mud density and conducts the Marsh funnel viscosity test on a regular basis when the mud is circulating in the hole. The derrickman reports to the toolpusher, but is instructed in detail by the mud engineer on what to add to the mud, how fast and how much. His other job is to handle pipe in the derrick while pulling out or running into the hole.