A field of study in which basin-filling sedimentary deposits, called sequences, are interpreted in a framework of eustasy, sedimentation and subsidence through time in order to correlate strata and predict the stratigraphy of relatively unknown areas. Sequences tend to show cyclicity of changes in relative sea level and widespread unconformities, processes of sedimentation and sources of sediments, climate and tectonic activity over time. Sequence stratigraphic study promotes thorough understanding of the evolution of basins, but also allows for interpretations of potential source rocks and reservoir rocks in both frontier areas (having seismic data but little well data) and in more mature hydrocarbon provinces. Prediction of reservoir continuity is currently a key question in mature hydrocarbon provinces where sequence stratigraphy is being applied.

The field originated during the 1960s with the study of the stratigraphy of the continental USA, where numerous unconformities could be correlated widely, and led to the proposal that major unconformities might mark synchronous global-scale events. Through sequence stratigraphy, widely-separated sediments that occur between correlatable unconformities could be compared with each other. Studies of outcrops and seismic lines bore out these concepts, which initially were called "Seismic Stratigraphy" and first published widely in 1977. Further study of seismic lines led to the interpretation of the geometry or architecture of seismic events as representing particular styles of sedimentation and depositional environments, and the integration of such interpretations with well log and core data. Because of the simultaneous, competitive nature of the research, numerous oil companies and academic groups use the terminology of sequence stratigraphy differently, and new terms are added continually. 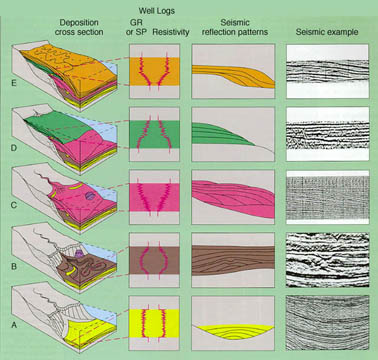