A characteristic sequence of sedimentary structures occurring in sedimentary rocks deposited in areas of deep water sedimentation by turbidity currents, which form deposits called turbidites. In theory, a complete Bouma sequence comprises sediments that fine upwards, consisting of a lowermost layer of coarse, chaotic clastic sediments deposited under conditions of high depositional energy overlain by successively finer grained and better stratified sediments like sands and muds deposited under calmer conditions that are labeled as Units A though E. In practice, however, the chaotic, high-energy nature of turbidite deposition can alter or remove underlying sediments so that incomplete sequences of sediments typically remain preserved. 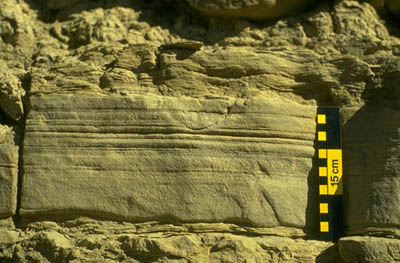