A device that can be run into a wellbore with a smaller initial outside diameter that then expands externally to seal the wellbore. Packers employ flexible, elastomeric elements that expand. The two most common forms are the production or test packer and the inflatable packer. The expansion of the former may be accomplished by squeezing the elastomeric elements (somewhat doughnut shaped) between two plates, forcing the sides to bulge outward. The expansion of the latter is accomplished by pumping a fluid into a bladder, in much the same fashion as a balloon, but having more robust construction. Production or test packers may be set in cased holes and inflatable packers are used in open or cased holes. They may be run on wireline, pipe or coiled tubing. Some packers are designed to be removable, while others are permanent. Permanent packers are constructed of materials that are easy to drill or mill out.

A downhole device used in almost every completion to isolate the annulus from the production conduit, enabling controlled production, injection or treatment. A typical packer assembly incorporates a means of securing the packer against the casing or liner wall, such as a slip arrangement, and a means of creating a reliable hydraulic seal to isolate the annulus, typically by means of an expandable elastomeric element. Packers are classified by application, setting method and possible retrievability. 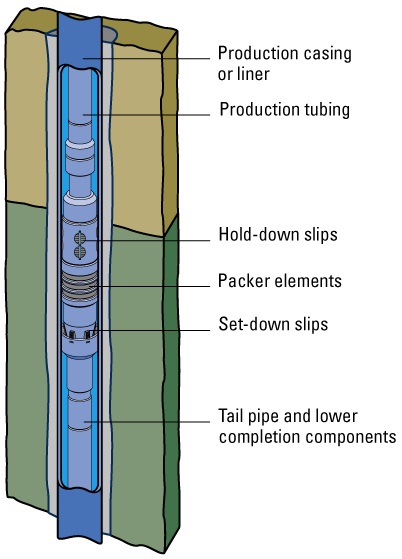