An instrument used for quantitative analyses of sulfides and carbonates. Specific test methods have been published by API. The oil-mud procedure analyzes active sulfides and uses whole mud samples, whereas the water-base drilling fluid procedure tests filtrate. The Garrett Gas Train (GGT) unit is a clear, plastic block (2.5 in x 4 in x 6 in) that contains three interconnected chambers. A carrier gas is used to flow an inert gas through the chambers. The sample is placed in chamber #1 and is acidified to release sulfides as H2S and carbonates as CO2. The appropriate Dräger tube is used to measure the effluent gas that is evolved from the sample. The device is named after Bob Garrett, who invented it while at Exxon Production Research. 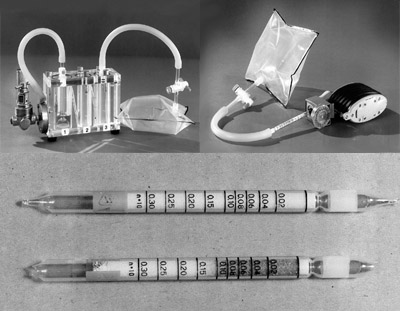 Photograph of the Garrett gas train.