The naturally occurring, solid, insoluble organic matter that occurs in source rocks and can yield oil upon heating. Kerogen is the portion of naturally occurring organic matter that is nonextractable using organic solvents. Typical organic constituents of kerogen are algae and woody plant material. Kerogens have a high molecular weight relative to bitumen, or soluble organic matter. Bitumen forms from kerogen during petroleum generation. Kerogens are described as Type I, consisting of mainly algal and amorphous (but presumably algal) kerogen and highly likely to generate oil; Type II, mixed terrestrial and marine source material that can generate waxy oil; and Type III, woody terrestrial source material that typically generates gas. 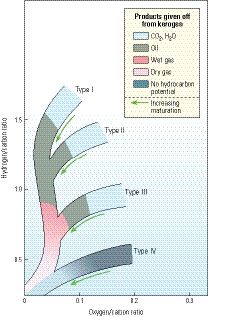